After we went to London (please read that post before this), we went to Dublin, Ireland. Dublin has a landscape much different from London – Dublin was darker and gloomier than London. Despite being dark and gloomy, Dublin has great museums. My favorite is the Dublinia.

The Dublinia is a museum about the Viking attacks on Dublin. We visited the first floor, which was about the life of Vikings, what they dressed in and most importantly, what weapons they used. Vikings used mainly axes and spears. My favorite kind of axe is the double bladed axe. Contrary to popular belief, Vikings didn’t wear horned helmets in war. People might have thought so because in ceremonies the Vikings sometimes wore horned helmets in honour of the mighty norse god Thor. They usually didn’t wear helmets at all. The Vikings were not only blood-thirsty warriors, they were traders too. That’s why Vikings didn’t wear fancy plate armor – they usually dressed in everyday clothing. Only rich Vikings could afford chainmail and a helmet. Vikings sometimes carried short swords for stabbing. They also carried round shields with a metal boss in the middle. 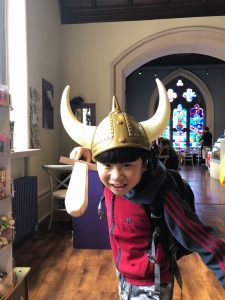 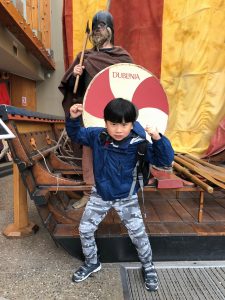 Then we went to Dingle, where we rock climbed at Explorers World. I used to be afraid of rock climbing, but I climbed on easy climbs and then gradually increased the difficulty until my hands cramped. It was so fun.