For summer break my family and I went to the bustling city of London. London was amazing, there were so many people, shops, tubes and black taxis!  We visited the iconic Tower Bridge of London. The Tower Bridge was awe-inspiring, it was so big! From the Tower Bridge, you get a spectacular view of the Thames River. You can also climb to the top of the Tower Bridge to walk on a glass-bottom walkway. But when you look down, you suddenly doubt the strength of the glass beneath you. Aaaaahh! The Tower Bridge was also capable of lifting its bridge arms to let big cargo boats pass by. After we got down from the Tower Bridge we went to get some ice-cream🍨! Just kidding, I was thinking about getting ice-cream, but we went on a ferry instead⛴. The ferry brought us to Shake-your-spear (i.e. Shakespeare) Globe. In the Shakespeare Globe we got a funny comic, it was called “Deadpool Does Shakespeare”. 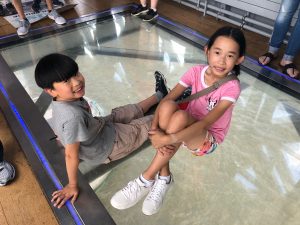 We also visited Hamleys – “The World’s Finest Toys”. Hamleys has five floors! Hamleys has a floor dedicated to Nerf. We obviously visited that first. Standing in front of so many Nerf guns was too tempting! My favorite Nerf gun is the one and only Stryfe. The Stryfe is a semi-auto Nerf gun. My favorite Nerf darts are the Accustrike Darts, because they are more accurate.